To share your memory on the wall of Mary Clark, sign in using one of the following options:

Mary graduated from Scott Community High School in 1952. She and her husband farmed in the Modoc area. After her second marriage she moved to Lane County and later returned to Scott City. She was a member of the First Christian Church of Scott City and the VFW Auxiliary. She loved to follow her grandchildren with their activities and her bridge groups.

She was preceded in death by her Parents, both Husbands and 2 Brothers- Merlin Allen and Keith Ray Allen.

Funeral Service will be at 1:30 PM Monday at First Christian Church in Scott City with Rev Warren Stecklein officiating. Burial will be in Dighton Memorial Cemetery. Memorials are suggested to Scott Hospital Foundation- Caring Hearts or Lane County Healthcare Foundation in care of Boomhower Funeral Home. Friends may call from 2:00 PM to 5:00 PM Saturday and Noon to 8:00 PM Sunday at Boomhower Funeral Home in Dighton. Condolences may be posted at www.garnandfuneralhomes.com 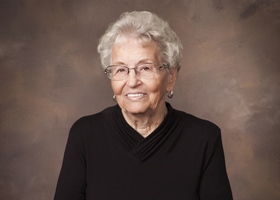