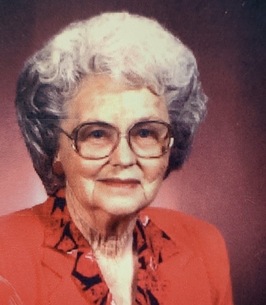 Garden City- Ruby Dyer, 103, died on Sunday, June 5, 2022 at McMahon Tomlinson Nursing Center in Lawton, Oklahoma. She was born on August 14, 1918 at Hollis, Oklahoma the daughter of David and Ells Southworth. She married Henry Alvin Dyer on March 30, 1935 in Anadarko, Oklahoma.

Ruby moved with her family to Garden City in the early 1950’s. She became a pioneer of women in business owning a successful ceramic shop and selling Avon for 30 years. She was a very talented seamstress doing alterations at upscale women’s clothing stores. She was a member of the Church Of The Nazarene and enjoyed spending time with her family and friends. Over the years she took up crocheting, embroidery, tatting and oil and watercolor painting.