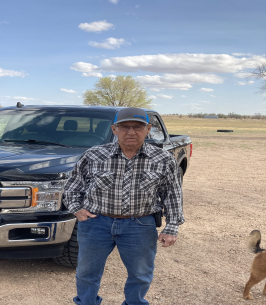 Robert Glenn Carter, age 77, of Ulysses, Kansas, died Monday, June 6, 2022, at his home in rural Grant County, Kansas. He was born December 8, 1944, at the Leopold Hospital in Ulysses, the son of Glenn Nathan and Alice Susan (Jarboe) Carter.

Robert was a lifetime resident of Grant County and graduated from Grant County Rural High School. After an honorable discharge from the United States Army, he returned and began farming. He retired from farming in 1992 when he became a gearhead repairman. Most of this career was with Minter-Wilson Drilling Company. Robert married Rosann Heinrichs on August 9, 1969, at the Mennonite Brethren Church in Ulysses. He enjoyed mowing and any farm related activity. He loved riding 4-wheelers and sharing that time with his grandkids.

Robert is preceded in death by his parents, Glenn and Alice Carter; wife, Rosann in 2014; granddaughter, Makayla Alice Rosetta; and nephew, David Leierer.

Graveside service will be held Friday, June 17, 2022, at 10:00 AM at the Ulysses Cemetery in Ulysses with Pastor Steve Swann officiating. Military rites will be conducted by Dexter D. Harbour American Legion Post #79. The service will be live streamed on Garnand Funeral Home Facebook page. Visitation will be Thursday, June 16, 2022, from 10:00 AM until 8:00 PM at Garnand Funeral Home in Ulysses. Memorial contributions may be given to the Harvest Christian School in care of Garnand Funeral Home, 405 W. Grant Ave., Ulysses, KS 67880. Condolences may be posted at www.garnandfuneralhomes.com.