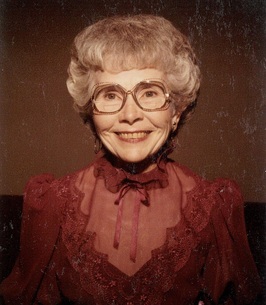 Florence Evelyn Wadsack Wilson, died on Wednesday, June 15, 2022, in Garden City, Kansas. She was born October 8, 1920, on the family homestead northwest of Kalvesta in Finney County, Kansas to Ben and Vella (Yeiter) Wadsack.

She received her elementary education at Solid Rock and the Ravanna schools. She graduated from Garden City High School in 1938 and was also a graduate of the Juco (GCCC) in 1940. She attained her B.S. in Education from KSTC, now Emporia State University.

On May 4, 1941, Florence married Wallace Wilson. Some months later, Wallace was drafted to WWII and served in the Signal Corp. European Theatre and returned at war’s end. Florence taught school during the war and was also a Red Cross nurses aid volunteer at St. Catherine Hospital. She taught Sunday School and was in the church choir for many years.

Florence was proud to be a DAR, as she had three ancestors who fought in the Revolutionary War. She represented her Wadsack family at the “Pioneers of Finney County” event given by the Finney County Historical Society. Florence played in the “Humdinger Band” of Garden City for 24 years. She authored a book “The Return of Dolly Jane” in 1989. She helped in the narrations of the “Black Blizzard,” a documentary on the History Channel which defined the Dust-Bowl days of the 1930’s.

Florence claimed God as her “Silent Partner” throughout her lifetime and Philippian’s 4:13 was her favorite scripture. She is preceded in death by her parents; her husband; a son Calvin; and Grandsons Travis Wilson and Justin Wilson.

Funeral services will be held at 10:30 a.m. on Monday, June 20, 2022, at Community Congregation Church in Garden City with Pastor Jeff Starkey and Rev. Jerre Nolte officiating. Burial will follow at Valley View Cemetery in Garden City. Friends may call from 2:00 p.m. to 8:00 p.m. on Sunday at Garnand Funeral Home. Memorials are suggested to the Florence Wilson School Library in care of the funeral home. Condolences may be given at garnandfuneralhomes.com.