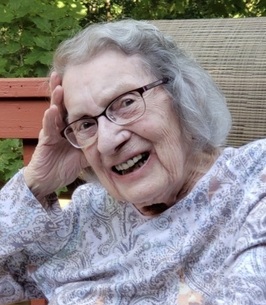 While growing up Toni lived in several places before graduating from Dodge City High School and attending Kansas State University. She moved to California and did clerical work and then moved to Wichita during World War II and worked at Cessna. She and Walter moved to Garden City in 1949 where he pursued his career in farming. Toni was a homemaker but also held several clerical positions. In her free time she volunteered for many local organizations. She was a member of the First United Methodist Church of Garden City, Ks and was involved in her Builders Sunday School class, bible study and UMW circles. She also belonged to the Acorn Club and the Epsilon Sigma Alpha social sorority. Toni enjoyed bridge, ceramics, painting, her flower garden, crossword puzzles and reading Christian Literature.

She is survived by her Daughters- Sharrie Wartell of Topeka and Susan Grothusen (Dave) of Scott City, 3 Grandchildren- Brent Wartell (Jenifer Colpitts), Jana Harden (Julia Kizzar) and Ashley Goss (Loren), 7 Great-Grandchildren and 3 Great-Great-Grandchildren. She is preceded in death by her Parents, Husband, Grandson- Thomas Wartell, 3 Brothers and 5 Sisters.