To share your memory on the wall of Kenneth Giskie, sign in using one of the following options:

Provide comfort for the family of Kenneth Giskie with a meaningful gesture of sympathy.

Kenneth graduated high school at Towner, Colorado. He served in the US Army. Kenneth married Wanda Gail Reinert in Towner, Colorado, on April 5, 1953. She preceded him in death on July 21, 2009. They moved to Garden City, Kansas, in 1971 from Towner. Kenneth had farmed and worked as a mechanic for Sunflower Electric until his retirement. He enjoyed playing cards and riding motorcycles.

Kenneth is preceded in death by his parents; son, Erwin Dean Giskie; and brothers-in-law, Eldon Reinert and James Reinert.

Receive notifications about information and event scheduling for Kenneth

We encourage you to share your most beloved memories of Kenneth here, so that the family and other loved ones can always see it. You can upload cherished photographs, or share your favorite stories, and can even comment on those shared by others.

Posted Apr 26, 2019 at 02:25pm
Ken and I farmed together for seven years (until he quit at age 81). I had advertised in the Garden City Telegram and met him in a local restaurant for interview. There set a man 15 years older in long shorts having arrived early. He said he had retired early from Sunflower and wanted to work part time as he wanted something to cover insurance payments. I was impressed at first and really impressed as we began to work together. The farm was 41 miles from town so he was willing to car pool with me. He was always willing and able to work as the work load demanded for farming. He could do mechanically what I could not do so this was a great fit.
When Ken told me he had to have knee surgery I figured I would have to find help. He soon told me he was able to work after only 2 weeks. He said he would not be able to crawl so he would have to call me if he had a plug up. We decided that he should do the disc drill as it had the fewest problems. He never called me once and in the end he did far more acres that the larger drill had done.
Once we got in a bind in that we had rain so I had fields ready to work before I had returned from our family's annual vacation to Colo. the 10th of Aug. Ken could hear my anxiety about leaving the fields growing to weeds ahead of fall seeding of wheat. When I returned to town and picked up Ken we got to farm to see that he had worked all the fields in my absence. We just came back to town.
When Ken was with me I knew that I could do anything so I picked up more ground. I was up to 5,000 acres and not in trouble. Ken told me in Jan that he could not work that year. Just 3 months later I had a 2 way bypass. I just could not figure how I could do the job without Ken. When Wanda was starting to have poor health Ken always put Wanda first so that was fine. I knew one tractor would be running. We really did have a good fit as partners. He never complained and he knew I would be doing as dirty of work as he.
As a person and employee or husband he was outstanding. We were both military so both loyal to country. I'm sure he thought I was a talker because he did not talk so much. But, he had to put up with me as I was driving. One time my wife came to farm and met us on the dirt trail. She saw Ken driving from the passenger side of the pickup and myself looking at paperwork from the drivers seat. I think we both liked working and I'm sure that Ken liked to farm and keep machinery running.

I'm sorry about your grandfather but I saw the message in the handout and I think it fit my friend, Ken. He always was humble and thought of me and my farm's needs.

With sincere regard we want to wish you all the best because we know that is what Ken would have wanted. He was proud of all of his children always. Jay Cook
Comment Share
Share via: 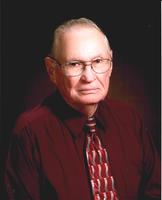