To share your memory on the wall of Carol Schulz, sign in using one of the following options:

Carol moved with her family to Lakin, Kansas while she was in grade school. She has lived in Lakin since. On February 21, 1969, she married Jerry D. Schulz in Lakin. Carol worked as owner and operator of Jerry’s Bicycle, CJ Pawn, & Hot Rod Video Store. She was a member and past president of the Lakin Lions Club, served as a Girl Scout Leader, Member of the Lakin Jaycees, and the CB Club. She was an avid Elvis fan, enjoyed going to the casino, and she especially loved to spend time with her grandchildren and great-grandchildren.

A memorial service will be held at 10:30 a.m. on Friday, May 10, 2019 at the First Presbyterian Church in Lakin, Kansas with Rev. Larry Alexander officiating. Burial will follow at the Lakin Cemetery. There will be no calling hours. The family suggests memorials given to Miles of Smiles in care of Garnand Funeral Home of Lakin, Kansas.
Read Less

Receive notifications about information and event scheduling for Carol

We encourage you to share your most beloved memories of Carol here, so that the family and other loved ones can always see it. You can upload cherished photographs, or share your favorite stories, and can even comment on those shared by others. 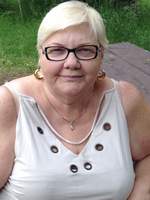