To share your memory on the wall of Orman Brent, sign in using one of the following options:

Orman moved to Denver at the age of 18 and worked in the Denver Stockyards; at 23 he moved to Stockton, California, and worked for a rubber company. Four years later he moved to Ulysses and worked for Columbian Chemicals at Hickok Carbon Black Plant. He retired in 1995. Orman met Betty Lou Oliver in 1958, which lived across the alley from him. They dated and married on April 3, 1959; just celebrating their 60th wedding anniversary. Orman also worked part time as a mechanic and later repaired TV’s and electronics. In 1974, Orman opened Brent’s TV and Electronics. His hobbies and enjoyment were his family, playing the harmonica while Betty accompanied him on the organ or accordion, helping the boys in the family with carpentry or mechanic work. Orman was a very hard worker, sometimes working 40 hours a week at both his full time and part time jobs.

Orman is preceded in death by his parents; brothers, William Leroy and David Owen; and sister, Irene Lucille Branham.

Funeral service will be Friday, July 5, 2019, at 10:30 AM at Country View Baptist Church in Ulysses with Pastor James Berry officiating. Interment will follow at Ulysses Cemetery. Visitation will be Thursday, July 4, 2019, from 2:00 PM until 8:00 PM at Garnand Funeral Home in Ulysses. Memorial contributions may be given to American Cancer Society or American Diabetes Association in care of Garnand Funeral Home, 405 W. Grant Ave, Ulysses, KS 67880.
Read Less

Receive notifications about information and event scheduling for Orman

We encourage you to share your most beloved memories of Orman here, so that the family and other loved ones can always see it. You can upload cherished photographs, or share your favorite stories, and can even comment on those shared by others. 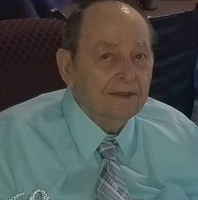