To share your memory on the wall of James Dale, sign in using one of the following options:

Provide comfort for the family of James Dale with a meaningful gesture of sympathy.

Jim grew up in Garden City where he attended Garden City schools and graduated from Garden City High School in 1953. He then served in the United States Army during the Korean War. On June 30, 1961, he married Reta Mae Smith in Walsenburg, Colorado. They lived in Spanish Peaks, Colorado, Garden City, Kansas, and later moved to Lakin, Kansas in 1971. They have lived in Lakin since. A lifetime farmer and rancher, Jim was also owner and operator of J&R Ready Mix and Garden City Mack Truck. He was a member of the American Quarterhorse Association and the NRA. Jim’s hobbies include woodworking, leather work, roping, and he loved his horses and dogs.

Funeral services will be held at 10:30 a.m. on Monday, November 11, 2019 at the Deerfield United Methodist Church in Deerfield, Kansas with Rev. Heureuse Kaj officiating. Burial will follow at the Lakin Cemetery in Lakin, Kansas. There will be no calling hours. The family suggests memorials given to the Finney County Humane Society in care of Garnand Funeral Home of Garden City.
Read Less

We encourage you to share your most beloved memories of James here, so that the family and other loved ones can always see it. You can upload cherished photographs, or share your favorite stories, and can even comment on those shared by others.

Posted Nov 09, 2019 at 11:04am
Where do I start when talking about my Aunt Reta and Uncle Jim? There wasn’t a day they weren’t in my life. One of the first life lessons that I remember was that it was not okay to go their neighbor’s house and pick all those pretty flowers to give to your Aunt, especially when your uncle was feuding with them! After explaining why it was wrong Aunt Reta insisted I go apologize because even though 4 or 5 year old me was scared it was the RIGHT thing to do. I’m sure Uncle Jim had a great laugh over that one – he had a quiet but giant sense of humor that would surface when you least expected it. He could deliver a joke in his drawl in such a deadpan way that it sometimes took you a minute to realize what a hilarious tidbit had come out of his mouth.

Uncle Jim loved being a farmer. Working the land, raising cattle and horses while always accompanied by a dog or two was his joy. Uncle Jim taught us the value of hard work. He didn’t give us little tasks to make us feel like we were helping, he actually treated us as people capable of helping accomplish the task of the day. He taught us to set irrigation pipes and put us on the back of the flatbed with baling hooks to bale the hay coming up the conveyer – until my sister went a little wide with one and knocked Jeff off the back of the truck. If I remember right though as soon as Jeff was deemed ok we were put back to work. He loved going out to feed the cattle and everything that went with raising them. He loved horses and in fact Reta and Jim were married on horseback at a rodeo in Walsenberg, Colorado. He raised a Quarter Horse Champion named “She’s a Dandy Doc”. He believed in hard work, working the land and and raising cattle but I think his greatest joy was having Reta as his soulmate and being a part of the magic world she spun around him.

Whereas Uncle Jim would quietly observe life taking everything in sometimes commenting with his dry wit, Aunt Reta was the opposite. She never met a stranger and she was always in action. Once Aunt Reta welcomed you into her life you were surrounded by her light and love. I always thought of her as twinkling and magical. She could do anything from healing a baby bird or injured owl to birthing calves and piglets. She was the bravest, strongest and most joyful person I have ever known. Her joy came from her love of family, love of her fellow man, love of her country but most of all her love of God and Jesus.

She always told my sisters and I that we were HER GIRLS too and we knew without a doubt that her love was all encompassing. She helped anyone that needed help without hesitation and without fear. I recall the story of her picking up a group of hunters with rifles off a dark country road and driving them to their car a few miles away. She never thought this might be dangerous, she saw someone in need and had the conviction that she was put there to help and she did that without question. The other story that sticks in my mind was the one where she was carjacked in Florida by an armed robber as a young woman. My aunt talked to him about himself and God and talked him into letting her drive him to the local police station where he turned himself in…she reached out and connected to his humanity just as she did with everyone she met.

She also volunteered and spoke to young pregnant girls considering adoption or abortion and talked many of them into having their babies instead of aborting – something she felt strongly about, having received her own miracle babies through adoption. Her greatest joy was being a mother and she loved her sons deeply. I don’t know how many lives she saved but I do know that every life was precious in her eyes.

She loved her country. I’m sure everyone that knew her knows that if the National Anthem came on she was immediately standing with her hand on her heart …I’m not talking just at events, if it played on the television before a game she was standing, even in the middle of Thanksgiving dinner!! She came to see my sister off to Afghanistan and at the airport she veered away from us and started hugging and thanking every man or woman in uniform that she saw. I grew up an Army brat and spent most of my life as an Airforce spouse and have known some very patriotic people but none as patriotic as my Aunt Reta. Jeff told me that she hated Mondays and wanted maybe a Tuesday funeral but this Monday in particular is special as it is Veteran’s Day, a day where we don’t work and stop to honor our men and women who have pledged to defend and protect our country. I think it is highly appropriate to honor her on the same day we honor our Veterans because she was the epitome of courage and sacrifice and I think she might have liked that.

Finally I think the joy that she radiated out to all of us came from her greatest love of all – that for God and Jesus. Her faith was her core. She had bibles all over her house and many of the pages survived the inferno – but the one I happened to pick up was a few pages from Revelations where it talked about Satan testing your faith and if you passed that test you would see the shining Holy City. I know that she would tell us that this fire that took her and Uncle Jim’s earthly bodies did not shake her faith for one minute and it did not take her soul or her spirit. Her soul is with God and her spirit lives on in every person she touched. She would tell us to be happy for them because she and Jim are standing on the roads paved with gold in the presence of Jesus and her joy is over-flowing. Posted Nov 08, 2019 at 06:25am
Deepest condolences to the Dale family. I have fond memories of Jim, an original Cowboy, always kind to me and my kids, welcomed us like we were his own. He will be missed his story telling will be missed his laughter will be missed. I know he’s watching a good western show with the man upstairs and basking in His glory. I pray for peace, comfort and strength for the family during this difficult and confusing time.
Comment Share
Share via: 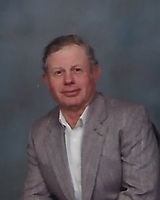 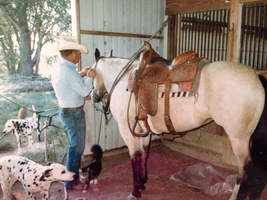 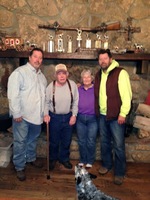 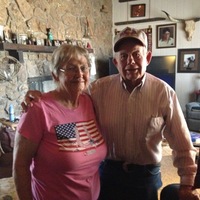