To share your memory on the wall of Mark Schaffer, sign in using one of the following options:

Provide comfort for the family of Mark Schaffer with a meaningful gesture of sympathy.

Mark grew up in Garden City where he attended school and graduated from Garden City High School. He then served in the United States Army from August 1974 to August 1975. Following the service, mark lived a big part of his adult life in Wichita, Kansas. He later moved back to Garden City and has been a resident of Ft. Dodge since. 2011. He married Diana Carter in Haysville, Kansas. Mark worked as a self employed carpet and tile installer. He enjoyed boating, fishing, camping, and spending time with his nieces and nephews.

Survivors include a daughter Ivy Schaffer of Haysville, Kansas; a son Elijah Brau of Manhattan, Kansas; a sister Christina Knoll of Garden City, Kansas; a brother Curtis Schaffer of Loveland, Colorado; and one grandchild. Mark is preceded in death by his parents and three brothers Michael Schaffer, Randall Schaffer, & Brian Schaffer.

Friends may call from 5:00 p.m. to 8:00 p.m. on Wednesday and from 9:00 a.m. to 8:00 p.m. on Thursday all at Garnand Funeral Home in Garden City. A private family service and burial will take place at a later date. The family suggests memorials given to the Kansas Veterans Soldier’s Home at Ft. Dodge in care of the funeral home.
Read Less

We encourage you to share your most beloved memories of Mark here, so that the family and other loved ones can always see it. You can upload cherished photographs, or share your favorite stories, and can even comment on those shared by others. 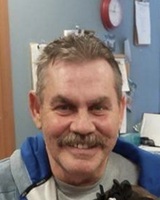