To share your memory on the wall of LeRoy Brown, sign in using one of the following options:

LeRoy grew up in Holcomb and Garden City and attended Garden City schools. He later served in the United States Marine Corp during the Korean War. LeRoy later earned a Master’s degree in Mathematics. On June 10, 1956, he married Meredith Munstedt in Dighton, Kansas. They lived in San Diego, Ca., Pittsburg, Ca., and Concord, Ca. before moving to Garden City in 1982. LeRoy worked for twenty one years as a high school math teacher. After moving to Garden City, he worked as a Senior Lab Technician for Sunflower Electric. He also worked as a math tutor at St. Mary Catholic School. LeRoy was a member of St. Mary Catholic Church in Garden City, and he enjoyed woodworking, and maintaining his firewood for his home.

Survivors include his three children Perry Dale Brown, Marilynn Diane & husband Bill Nolte, and Jacque Lynn Sower all of Garden City, Kansas; seven grandchildren; and eight great-grandchildren. LeRoy is preceded in death by his wife Meredith who died on September 5, 1998.

Please note that the funeral services have been postponed to a later date. A private family interment will take place at a later date. There will be no calling hours. The family suggests memorials given to St. Mary School Endowment Fund in care of Garnand Funeral Home of Garden City.
Read Less

We encourage you to share your most beloved memories of LeRoy here, so that the family and other loved ones can always see it. You can upload cherished photographs, or share your favorite stories, and can even comment on those shared by others.

Posted Mar 18, 2020 at 03:47pm
Marilyn, I did not know that LeRoy and Meridth were your parents. I met them when they moved into the house on 9th & Fjulton across from Tom's Tavern. Deepest sympathy for your loss. May God give you comfort at this time and wrap his arms around you. Always enjoyed LeRoy when he would walk across the street. Your mother said after they moved to Garden City that he had never been happier.
Comment Share
Share via: 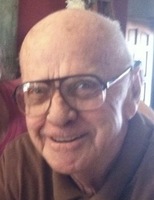