To share your memory on the wall of David Olivarez, sign in using one of the following options:

Provide comfort for the family of David Olivarez with a meaningful gesture of sympathy.

David worked as a welder and mechanic by trade and enjoyed doing anything outdoors, he loved traveling and fishing. David is described as being an honest man, brutally honest in fact. He was proud of his Texas roots and an avid Cowboy’s fan.

A memorial service will be held at a later date. The family suggests memorials given to the David Olivares, Jr. Memorial Fund in care of Garnand Funeral Home of Garden City. 412 N. 7th Street, Garden City, Ks 67846.
Read Less 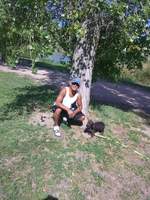